New to ES-DE? Check out the Frequently Asked Questions

News 2022-06-28: After being down for a couple of hours ScreenScraper is now working correctly again. Server capacity is reduced though so scraping may be slower than usual until the service has been fully restored.

News 2022-06-25: A recent operating system update to Fedora 36 has broken the FreeImage library that ES-DE depends on. Until the Fedora Project provides a fix for this issue the .rpm release of ES-DE is unusable on this operating system. The Current AppImage works fine however, so use that until the issue has been resolved. Find more details about the issue at Red Hat Bugzilla.

News 2022-06-22: ES-DE v1.2.5 is now available for download! This release brings shortcut support to Unix and macOS which greatly simplifies setup of applications as well as games for platforms like ports, steam, lutris and ps3. A couple of new systems have been added, most notably PICO-8, and RetroPie EmulationStation theme compatibility has been improved. As well the default keyboard quit shortcut has been changed from F4 to the operating system defaults (Alt + F4 on Unix and Windows and Command + Q on macOS). See the Changelog for more details.

EmulationStation Desktop Edition (ES-DE) is a frontend application for browsing and launching games from your multi-platform game collection.

It comes preconfigured for use with RetroArch and a number of standalone emulators. It's also fully customizable so you can easily expand it to include emulators or applications not covered by the bundled configuration.

It's also free and open source, but donations are very much appreciated to support the development! 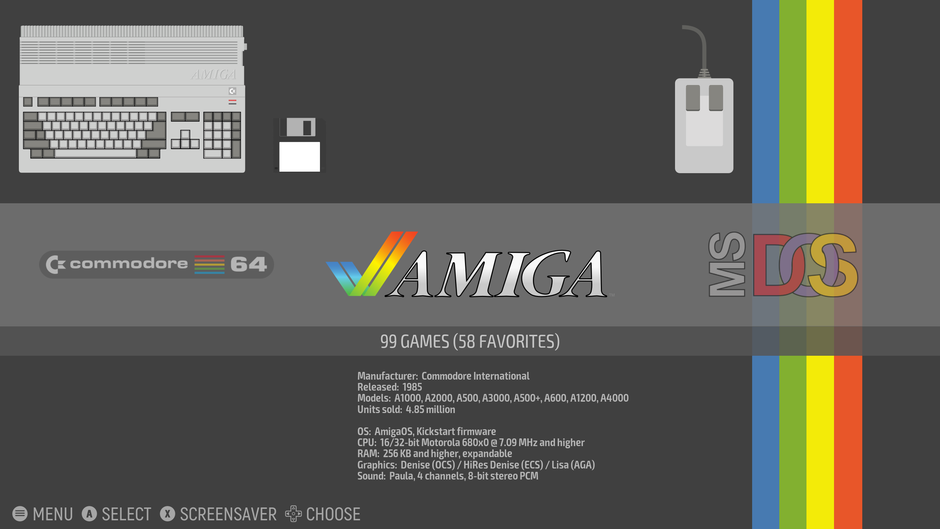 Simple to use, you'll be retrogaming within minutes

Still highly customizable if you prefer to tailor your setup 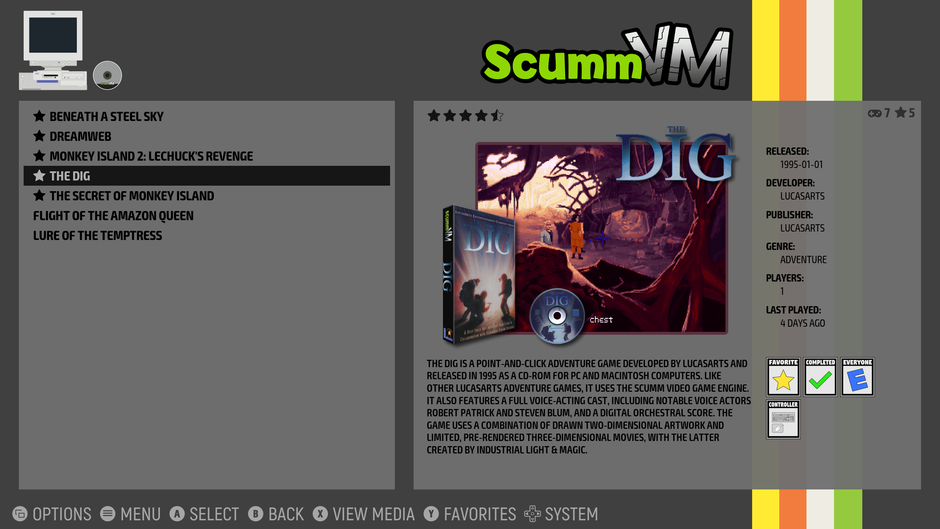 Supports scraping of both images and videos 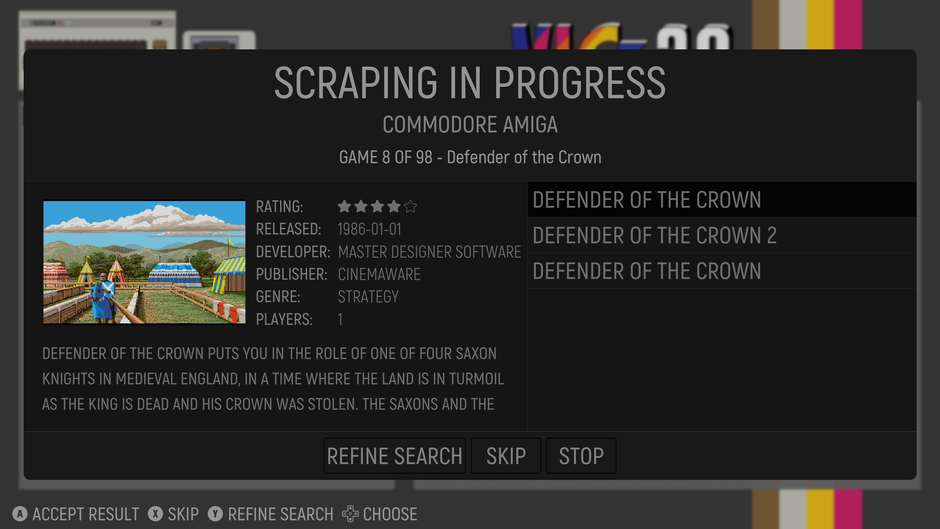 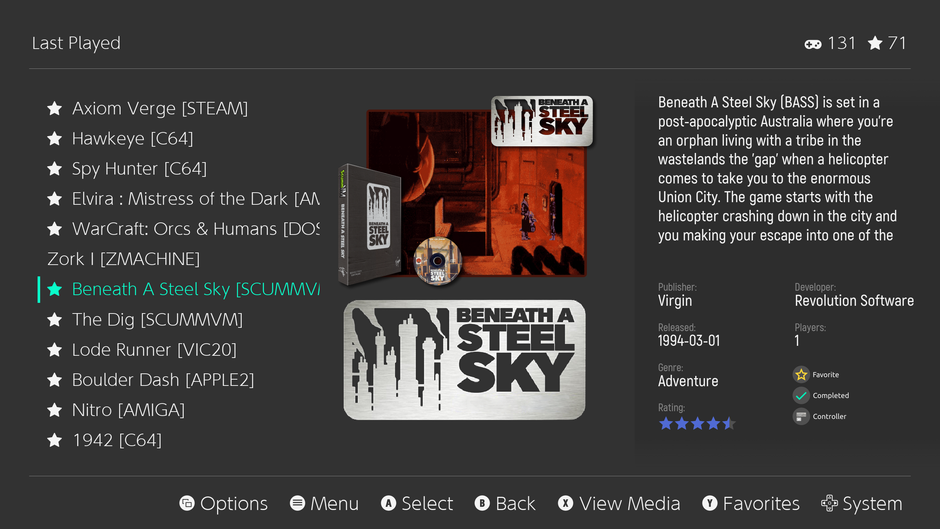 The screenshot above displays the modern-DE theme set that is bundled with ES-DE as an alternative to the default theme.

For the portable release make sure to read the README.txt file that is included in the ZIP archive. For new installations this is also the recommended release since it's much easier to setup.

Version 1.2.0 will be the last legacy release for macOS.

If using FreeBSD, NetBSD or OpenBSD you need to compile from source code for the time being. A detailed guide is available here describing this process step-by-step.

If you would like to download an earlier version for any of the supported operating systems, you can find all releases at the GitLab Package Registry.

Refer to the Changelog for detailed information about each release. This document also includes  a list of known issues.

There are videos available to explain the basic ES-DE installation, and there is a comprehensive user guide that covers setup and configuration in more detail. This guide also covers all application settings. If you need additional support, join our Discord server and we'll try to help you. If you prefer Reddit, then we have subreddit as well! For new users the FAQ is a good starting point as it answers some common questions about ES-DE.

This video shows how to install ES-DE on Windows 10 although it's also applicable to Windows 11 and 8.1. As of ES-DE v1.1 you no longer need to set the Path variable manually as RetroArch will be auto-detected.

This video shows how to install ES-DE on macOS, and should be applicable to all macOS versions supported by ES-DE.

This video shows how to install ES-DE on Linux (Kubuntu). It's however also applicable to Ubuntu and other Linux distributions. As of ES-DE v1.1 no workaround is required any longer if you've installed the Flatpak version of RetroArch.

The ES-DE repository is hosted on GitLab, head over there for a lot of additional information. The Kanban board is where you can see the development progress and report bugs. (It's also OK to provide bug reports via email or on Discord.)

ES-DE by itself does not provide any emulators, instead it's mostly relying on RetroArch for this. So in order to have a working retrogaming setup, you need RetroArch installed as well.

One of the most important features provided by ES-DE is the ability to scrape for game information and game media. Two scraper services are supported, TheGamesDB and ScreenScraper with the latter being the primary choice as they have a better database of information and media. It's a good idea to register an account with them as their service is frequently closed for non-registered users.

You can become an ES-DE patron via Patreon, or you can make donations via PayPal.

Your contribution will be used to cover running costs such as web hosting, signing certificates etc. There are quite some expenses to run a project like this so any funding is much appreciated!